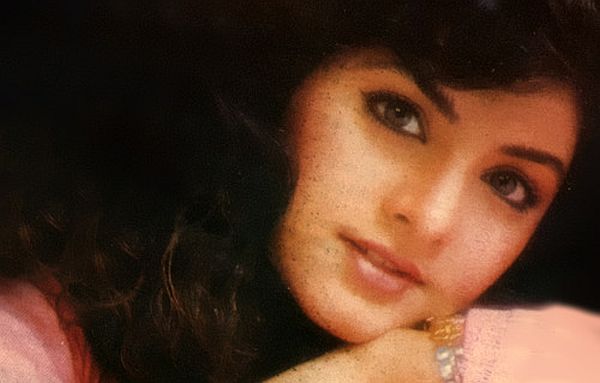 I don't understand how I missed writing about this actress who was the first EVER girl I had a crush / fascination (other than a sisterly attraction) on her marking my stepping into adoloscent age.. or otherwise that testosterone production had started in my body. I remember distinctly getting attracted to her by repeatedly flipping back to the same page in a Tamil weekly called Vasuki and that's the time I realised that I am getting attracted to the girls even though not exactly on a prurient fashion. During that period whenever I get a new pen, I used to write her name in different styles / typography. But when she died less than a couple of year or so after that realisation I felt little surprised that tears were rolling over my cheeks for the death news of a stranger... strangely. It was the then upcoming Bollywood star Divya Bharti, who died under mysterious circumstances on April 05, 1993.

I still can exactly pin point why I liked Divya but I was attracted strongly. Probably the name.. Like I had already mentioned I had fallen for that name after seeing Revathy's mind blowing performance in Mounaragam. And.. is it probably the lethal combination of innocent face & sensuous body which Divya possessed? I was exposed to the gossip magazines like Stardust / Movie, which carried lots of photoshoots of the actors. They look extra special in those photoshoots rather than on movie costumes. Divya's photoshoots were ultra charming. Else may the stories of her self destructing streak be a reason to get attracted to the wild side of this screen goddess? Whatever may the reason be I always remember Divya for opening the floodgates of testosterone flow in my life.

On her first death anniversay I got a cassette player from my neighbour and kept playing songs from her movies - Deewana, Rang, Geet, Dil Ka Kya Kasoor all the day as a tribute to her. Even though we didn't have a cassette player at our house, I had this habit of buying cassettes hoping to hear somewhere else. On the second anniversary I was little disturbed that day and still remember that uneasiness. And I too moved on like any other people from that age / time.

It had been 23 years and still people remember Divya through the magazines / journals and it may be for a reason that her death is still a mystery. And also it makes an interesting story of rise and death of a star from a school girl. Divya claimed that she was spotted by Telugu producer D. Ramanaidu when she was having icecream in a parlour with her friends. But her Tamil film producer claimed that her parents contacted them for the newspaper advertisement which the movie (Nilapenn) team had given in a Mumbai daily. But Divya enjoyed a Superstardom in Telugu cinema with blockbusters like Bobbili Raja, Rowdy Alludu, Assembly Rowdy and she was about to dislodge Vijayashanthi in popularity. But she was smitted by Bollywood bug by diverting her attention to Hindi films and diverted all the Telugu offers to her close friend Naghma who was a struggling actress in Bollywood.

Her first Hindi film was released in January 2, 1992 and she died in April 5, 1993. He had a staggering 12 releases in 12 months and was expected to dethrone the then superstar Sridevi. She was miles ahead when compared to her batch of debutanes - Manisha Koirala, Raveen Tandon, Naghma, Pooja Bhatt. There were news like Manisha Koirala threw a party to celebrate the death of Divya.

Oh Divya! I'll always remember you as my first ever female crush.