It was the sheer co-incidence that I saw the advertisement on Indian Express as well as the boredom of staying in Chennai on the weekends that made me attend the Madhubani Painting workshop in Dakshinachitra. To be frank I had no clue about what a Madhubani painting meant, until I googled for the same on the eve of the workshop. I would love to say that it made my weekend useful and better. I got exposed to an art that was sheerly purely the form of expression rather than going by and for rules of painting. I wanted to write about this painting on Sunday night itself but was having some other appointments and a subsequent mental block so that I couldn't read / write / paint anything. Atlast I am here to present this beautiful form of art for those who haven't heard about this. Madhubani paintings traces it origin to the Ramayana days - when King Janaka commissioned artists to do the paintings on the walls of the city to celebrate his daughter Sita's marriage. May be because of that Madhubani paintings have Sita as the main protagonist.

The name 'Madhubani' is derived from the words "Madhu (Honey)" and "Bani (Forest)" as it was practised by the women folks living in the forests. Normally these Madhubani paintings were done on the freshly plastered mud walls in the following areas of house - Khobar Ghar (The room decorated for the newly married couple to consummate their marriage), outside walls of the rooms and the verandahs. Madhubani is mainly an art practised by the womenfolk and it was passed on to the subsequent generation mainly by the elder women. But in the modern days, it is painted in the hand made paper as well as on the terracota walls. Nowadays you get Madhubani paintings on the curtains, bed spreads and even in the churidars.

Since it was practised by the women who were mostly confined into the walls of the house, this art was mainly a vent or a medium for their expression. So the physical anatomy proportions and 'authenticity' were never bothered about. This made the painting form easy to learn and practise for the women folks who were normally illiterates. The eye for colour patterns and aesthetics were well taken care of by the artists. Normally the colours were derived from the natural flowers and herb extracts, that gained its nature on drying. The paintings were basically the natural sceneries, royal durbars, deities whose style / pattern changed over with the passage of time however the traditional motiffs didn't change. The paintings depict any of the particular scene and the empty spaces were filled with the motiffs like flowers, birds, insects, animals and other elements of nature. 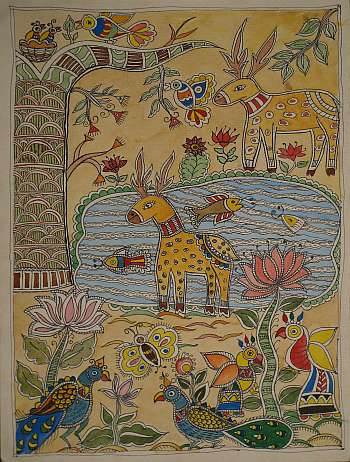 As the caste system was very much prevailing those days rampantly, it lead to the various styles of Madhubani paintings, based on the caste of the artist. They were:-
1. Tattoo - practised by the lower caste people and it had the lines and geometrical figures mainly as they were not much cultured / intellectual.
2. Kayastha / Kshatriya
3. Brahmin Style - Kayastha & Brahmin style had more elaborate designs, details and colours while depicting the scenes.

Based on the colouring, they are divided into two types namely:-
a. Kachni (Fine Lines)
b. Bharni (Filling Style) 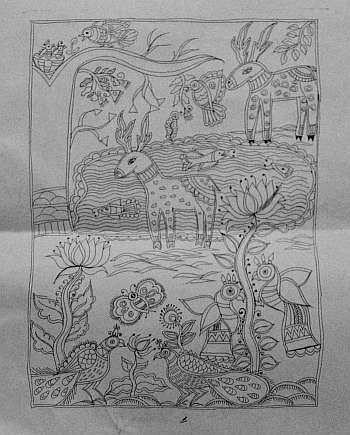 The distinct feature of this Madhubani painting is its boundaries. Unlike the normal paintings, the lines here are double lined with each 'segment' or 'part' of the painting painted in its 'enclave'. Also the parallel lines were fillied with designs like slanting lines, curves and atleast with the 'rails' pattern. Next mentionable feature is its vibrancy in colour pattern. The original / traditional Madhubani paintings are with subtle shades of colours whereas the current professionally available paintings are filled with darker shades. Normally the Madhubani paintings, while made in hand made paper, are painted with diluted consistency of the paints and to achieve the darker shade, many coatings were given.

Even though this post is not an exhaustive one on the Madhubai paintings, I try to put down whatever possible I could, including the motiffs I was taught in the workshop. You can google for the Madhubani paintings. If you are in Chennai, I can suggest you my teacher Mrs. Vasuki Lakshminarayanan (+91- 9444801435 / This email address is being protected from spambots. You need JavaScript enabled to view it.), even though I am no way affiliated with her except the fact that I learnt about the Madhubai Paintings in her workshop. Her conversations on the various forms of the arts were a connoisseur's delight, and the ability to get the basics properly imparted to the participants were worth mentionable. Like any art, to understand / get the style of the Madhubani paintings, you have to see a lot of paintings and analyse the patterns, so that you can convert any painting into Madhubani form. 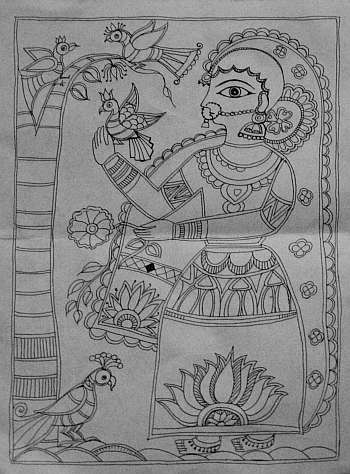 P.S: Till I attended this workshop, I was under the impression that Dakshina Chitra is merely an artworks sales center. But when I visited them & their corporate website, in the pretext of this workshop I realised that they are trying their level best to keep the traditions & taditional forms of arts alive through these kind of workshops. The merchandise they had displayed for sales is simply amazing with exclusive, hand made art pieces. And I can justify the cost of the art merchandise because I understand the kind of hardwork, dedication, an eye for aestheics that goes into each piece. Also Dakshina Chitra's attempt in recreating the prototypes of various kind of houses of South India deserves a special mention. 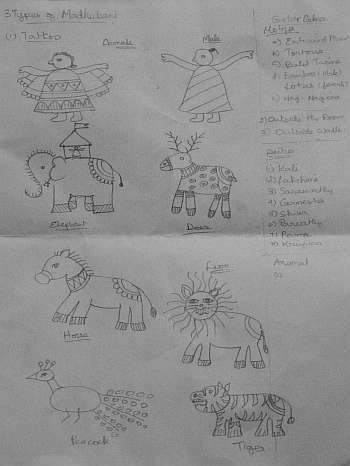